Boka (maóka Bóka) is a settlement in Serbia in the municipality of Secanj in the Central Banat Administrative District. According to the 2011 census, there were 1412 inhabitants.

Boka is located in central Banat. The railway Zrenjanin-Vršac passes south-east of the city, the Čot-Alibunar railroad passes south of the city, and the main road Zrenjanin-Vršac passes through Boka. Boka has a very large atar extending north to the Tamiš River, to the west to the Danube – Tisa – Danube canal, to the south to the Brzava canal, and on the eastern side it borders the Šarjana and Konak atar. The village atar borders with the following places: Neuzina, Banatska Dubica, Sečanj, Jarkovac, Konak and Šurjan. According to the geographical maps of Count F. K. Mersi from 1723 – 25, the Igan stream flowed into the Tamis between Boka and Neuzina as a tributary. 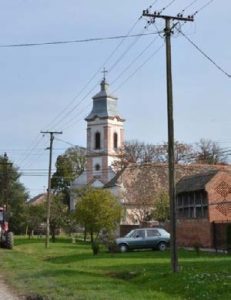 Boka has changed her name several times during her history: 1334 – Boka, 1338 – Borzatö Báka, 1717 – Boka, 1801 – Serbian and Croatian Boka and 1898 – Boka (Bóka). As early as 1334, Boka was mentioned as a parochial place belonging to the Kovin Committee. In 1338, the Hungarian name Borzatö-Baka was given to this place, because it lay at the mouth of Brzava (Brzava). From 1361-1362. The name of the settlement is Boka again. By the decision of Maria Theresa of 1778, a significant part of the estate of the Zagreb bishop and the Turopolj nobility was supposed to be transferred to the military administration. After many years of negotiations, an agreement was reached in 1801, by which the damaged noblemen received their estates in Banat, including Croatia’s Bay.