Idvor is a settlement in Serbia in the municipality of Kovačica in South Banat District. According to the 2011 census, there were 974 inhabitants. It is known as the birthplace of the Serbian scientist Mihailo Pupin.

Idvor is located 13 kilometers from Kovačica. The village was built on the touch zone of the wooden terrace and the alluvial flat Tamiš. The wooden terrace area has always provided good conditions for the cultivation of various types of crop cultivation, primarily grain and industrial plants, while the alluvial plain with its wetland, slate and meadow vegetation represents a place for hunting, fishing and cattle breeding. Idvor is located two kilometers away from Tamiš. Because of his position, he was removed from the main highway Belgrade-Zrenjanin-Kikinda, but was connected with it by a newly built traffic loop.

Idvor, as a small Serbian village next to Tamiš, is mentioned as early as the 17th century during Turkish rule in this region. When the patrons of the Peja Patriarchy in 1660 set out among the Orthodox brothers to collect attachments, they arrived in today’s southern Banat, in the village near Tamiš. Although Idvor had only a few houses, the hosts were so wide-eyed, that the singers were recorded in the list of an attendant, and dedicated them to a thank-you note. 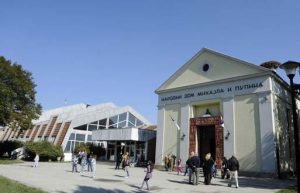 After leaving the Turks in 1717, according to the Comorian census, Idvor belonged to the Pančevo district. At that time, there were only a few houses in the settlement. With the onset of plague on two occasions (1732 and 1736), the village population was decimated, and the survivors then moved south of the original place, occupying a more favorable position.

In 1743, the inhabitants and the population subsequently built a typical border settlement in the Austrian system. In the center of the village there was a church, and around it the area for practicing the border guards so called. exterminator. Around the building there was a building of the administration, and in the periphery of settlements in squares with square bases, border guards built their own family houses.

Due to the fulfillment of military obligations, border guards had significant privileges: personal freedom, the right to religion, the right to education of their children in their mother tongue, received a certain area of ​​arable land and pastures, had the right to bake brandy, hunting and fishing. Revolutionary in 1848, border guards came into conflict with units of Hungarian revolutionaries, and then Idvor was burned. Upon the abolition of the border, soldiers cease all obligations and take away their previously acquired rights, and the local area falls under the authority of the Hungarian monarchy. Since 1872, Idvor, along with other places, has been connected to the Torontal Counties, whose headquarters were in Veliki Bečkerek (today’s Zrenjanin). The data indicate that at the beginning of the 20th century Idvor had 403 inhabited houses with 2,177 inhabitants.

Although Idvor is a small village, it is now known all over the world because in 1854 Mikhail Pupin was born.

Today, Mihail Pupin is reminded of his birth house, as well as the museum, which was built in the old school building, built in 1843 and the National House, Pupin’s Foundation for a Hometown, which was supposed to become a national university. It was opened in 1936, a year after the death of the endowment. The birth house preserved the outer appearance and the interior of Pupin’s childhood, while the museum depicts the life of scientists, from the first knowledge of the world to fame for achievements in America and the homeland.